skip to main | skip to sidebar

how gorgeous is this??? What about this for a great giveaway then... Look at the fabulous stuff she is giving away to celebrate her 100th blog posting. 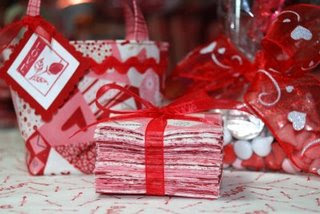 Well I'm a little slow getting over there to enter, but I'm So glad I didn't miss this one. 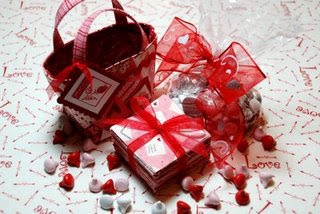 Thank you Kim for a fantabulous give away and Good Luck to everyone who enters!

I have cleaned out my sewing studio (well actually it is rowing man's study, but he is now squashed over into the corner), and made a list of projects to be completed. What a nasty thing to do, would you believe this? I have 15.. yes 15 projects that need to be completed, some quilts only need binding, and some need just a little more. I would not have imagined that I had so many UFO's/WISP's or whatever you want to call them - they all need to be finished and ticked off the list.

Thanks (and I do mean that) to Kris at Tagalongteddies for encouraging this, both Kris and May Britt have organised the "one project a month challenge" so I will certainly be challenged. And I certainly hope it will not take me all year to finish these, I have heaps more projects in mind, and I have told myself that I really need to get these done first. So action it is!!!

Mind, there is always room for a few new projects to be thinking about, and I have these lovely fabrics to play around with. Very subtle, cool and relaxing fabrics so I shall just quietly put some thought into how I might use these... 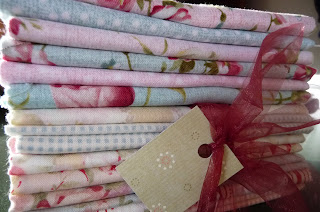 and this is a sneak peek at one of the gifts that I have made to send to Shannon, for the Vintage Valentine swap, it is on it's way to her now in the States. 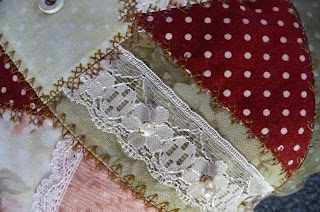 These swaps are just so much fun, but I would have heaps more time, if I could tear my self away from looking at all these wonderful blogs!!! It is so so habit forming, and whilst I really enjoy seeing what everyone is up to, it is extremely time consuming huh..

Shiree
Posted by Kiwifruit-Shiree at 11:26 AM 2 comments: 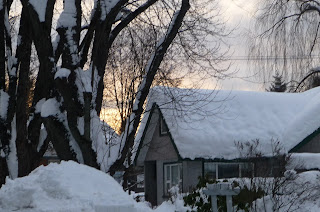 What a wonderful time we had in the snow, it was really amazing, and made such a difference to our usual Christmas/New Year holiday weather..... 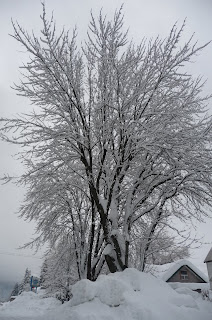 It did seem so odd to have a skiing holiday in the middle of our summer, but we did have so much fun, and so very much enjoyed our summer winter holiday. 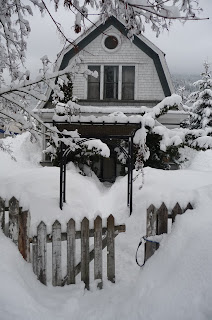 Can you believe the icicles on the windows of this house - 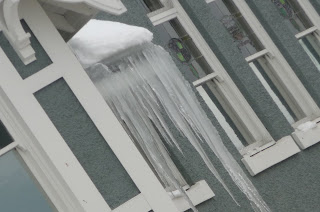 We were both so totally impressed with the Whistler village, and ski trails, and spent some time on both Whistler and Blackcomb. We travelled the Peak 2 Peak on the new gondola system, taking us from the top of Whistler to the top of Blackcomb, it took about 11 minutes to make the crossing, with breathtaking views... 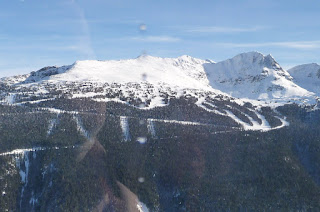 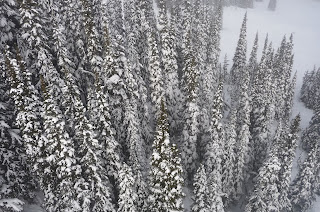 The ski trails were so very long compared to our tame New Zealand South Island ski areas, and so much powder snow, totally unbelievable. I do hope that we can have another holiday here in the future. 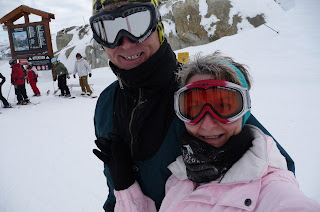 We stayed at a lovely bed and breakfast - Chalet Beau Sejour - that was a 10 minute walk from the Whistler village and the Gondola lifts. Our host, Sue was a really amazing person, and cooked these wonderful breakfasts. We talked about how we want to do the B&B thing in Twizel in 3-5 years, as a semi-retirement thing - so Sue gave us some really good hints & tips, and a great breakfast cookbook to swot up on and try out a few dishes over the next few years. I am sure that Tim is not going to object to this at all!!

and after a hard days skiing.... 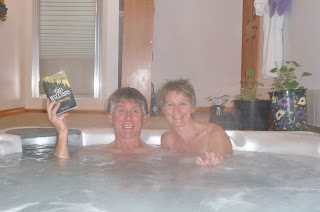 What better way to end a day huh (and ensure a great night's sleep!)
Posted by Kiwifruit-Shiree at 10:46 PM 3 comments:

I found a quilt shop!! ... here we are in BC Canada, and I found a quilt shp quite by mistake. Yahoo... (I am sure there are many more here,I just don't know the right places tolook, and when travelling on the highway we do not pass thru the towns so miss out), whilst we were waiting on the highway to open between Sicamous and Revelstoke today we decided to have a look around Salmon Arm, there are so many little resort towns in this district... and stumbled across this lovely shop which had so so many interesting things on display. I will take home some good ideas, and projects for the forthcoming year...

So just had to make a few purchases now didn't I. A few jelly rolls, and fat quarters, and a couple of kits and a pattern or two... And just so I would make myself feel better I got Tim to help with the choices, quite appropriate really as I am sure that he will end up with a new wallhanging quilt for his surgery.

The skiing up here is fabulous, and the snow is so amazing. We have nothing like this back home, and the ski runs are so long compared to the very short home runs, comparatively speaking. After a days skiing we sat in a wonderful hot tub for about an hour whilst all around us it continued to snow. And surprisingly it is not so cold as what one may expect. 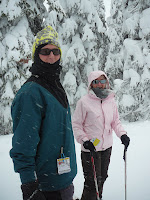 We are heading off to Vancouver via the Whistler ski field today, weather and road closures permitting.It has taken us 3 days to get to Revelstoke, so hopefully our return trip to Vancouver will be less eventful.

Still finding some stitching time 'tho!!!

Posted by Kiwifruit-Shiree at 7:03 AM No comments:

well, it has been such a long time since I was last on this blog... and so much has happened. Where do I start?

The week before Christmas, my son surprised us by getting engaged to his girlffriend of 5 years. How wonderful, we now have a wedding to look forward to in the future.They say it may be some time away as Christelle has family in France that she would like to have the opportunity of coming out to NZ, and son Cam has to finish his university studies.

Christmas was a real family event, and so much fun. I was lucky to have 2 of my adult children at home, but missed my youngest daughter, Janet, who lives in Perth, WA. We did talk by phone however, and when we last we talked she was off toBali for a holiday on Boxing day. I did manage to get my Christmas decorations and tree up in the few days before Christmas, once the workman had finally finished - and it does look so good.

We left NZ ourselves on Dec 28th, bound for Paris with a night stopover in Singapore. What a wonderful week in Paris - and it does snow there at this time of year! It was delightful, and of course we did all the usual touristy things. We were on the Champs Elysess on New Years eve, with about a million other people, it was so crowded, and so much fun. The road was closed off and was just so packed with people all there to celebrate the New Year. We went back on New Years day for morning coffee, and just sat and people watched.

On Mon 5th, we left Paris, 2 hrs later then scheduled, both Paris and Frankfurt airports were delayed due to snow, so we ended up missing our connection to Vancouver, Canada, and stayed overnight in Frankfurt (after standing in the line for over 5 hrs at Frankfurt to get rescheduled!!!), when we finally picked upour rental vehicle at Vancouver airport, we only managed to travel a short distance before checking into a hotel- we were really a little tired to manage the 6 hr drive to Revelstoke, and indeed the road was actually losed further up the line anyway due to a mudslip, there was such a lot of rain, that the avalanche and mud slip risk is still quite high.

On Wednesday (yesterday) we managed to get as far as Sicamous before we discovered the road was still closed thru to Revelstoke. we booked inot a motel - Best Western - thinking we woudl be there the night, however the word come throught that the road was open so off we went!! Tim was so keen to see his daughter who has been here for the last 2 years. About 20kms up the road we hit the road block, a further mudslip had closed the road, several trucks had got thru from the Revelstoke end, but we were in a very long queue of many trucks, and cars. So back to the motel, and here we are now, waiting for the road to open which will hopefully be mid-morning sometime. Quite an expensive night really as the motel charged us for 2 bookings!! How bad is that, we watched as several travellers tried to check in after we did, and the price of the rooms got higher with each traveller - so I am not sure where some people stayed - maybe in their vehicles - although that would have been so so cold!

Waiting gives me lots of time for stitching however.... and the Christmas quilt that didn't quite get stitched for Christmas just gone (I always try to do just more then I can actually realistically manage) has a high chance of being completed really early for Christmas 2009!

p.s. I visited a quilt shop in Paris behind Notre Dome called Le Rouvray - wonderful little place, and as all quilters are, so so friendly... and a lovely little stitching place in one of the covered walkways off Grande Boulevard where I managed to pick up some lovely stitching packs - so I will not be without anything to do over the next wee while huh...

No photos this time, as Tim is hurrying me to get in the shower so we can be ready when the road opens, and there are just so many to look thru! The power of digital photgraphy means that a lot more photos are taken - snap happy!
Posted by Kiwifruit-Shiree at 5:09 AM No comments: